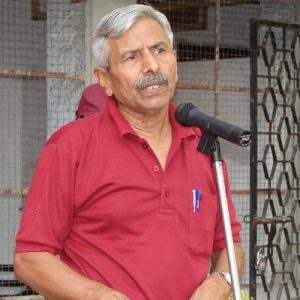 Late Col Sunil Deshpande VSM (Retd) is the architect of Prahar – Samaj Jagruti Sanstha. He was commissioned in 2nd Maratha Kali Panchwin in the year 1964. He took active part in the 1965 war in the Battle of Hussainiwala, wherein his battalion saved the Samadhi of  Bhagat Singh, Rajguru and Sukhdev and the Hussainiwala Headworks from going into the hands  of the Pakistanis. In the year 1971 Indo-Pak war Col Deshpande was present at the Battle of Sakkargarh. He also commanded the same battalion in which he was commissioned i.e.2nd Maratha Kali Panchwin in the thick jungles of North East. The President of India awarded Vishishta Seva Medal on Republic Day 1987 since the unit 2nd Maratha under his command, apprehended 76 insurgents in the thick jungles of Manipur and Mizoram 1983-1986. He has held various prestigious appointments in the Indian Army. He is an excellent orator and renders any given topic with ease. Being an able administrator, he is donned in the unique cradle of leadership. His goodwill has won accolades not only in the armed forces but also in the society.

On completion of the movie Prahar, he decided to take pre-mature retirement from the army in 1993 and work in the society to spread the message of the movie. And thus, Prahar- Samaj Jagruti Sanstha was born in 1994 with the aim that the society should have a soldiers mindset with philanthropic attitude which will automatically make the nation strong.

For his outstanding social work of awakening the masses, he was awarded :

to name a few.

Colonel Deshpande’s wife, Mrs. Shama Deshpande is also an active social worker. She has been a pillar of strength and takes keen interest in all the activities of Prahar organization. Her special guidance is received by the primary school of Prahar- Wasudeoleela Vidyakunj. Mrs. Deshpande is the joint secretary of Prahar- Samaj Jagruti Sanstha.

Colonel Deshpande’s two daughters also are trustees of this organization. His elder daughter Mrs. Sneha Mahajan is a renowned artist and takes keen interest in the oraganization’s work. She had topped Maharashtra in the Foundation Course of her graduation in Fine Arts.

The Colonel’s second daughter Flying Officer Shiwalee Deshpande(Retd) was commissioned in the Indian Air Force in 1997 in the Admn ATC /FC branch. When in college, she was an active NCC Cadet and was selected to represent Maharashtra in the Best Cadet category at the  Republic Day Camp of the NCC in New Delhi. Later on, she was chosen as the Best Girl NCC Cadet of the country wherein she got the coveted Gold Medal, Prime Minister’s baton and the trophy at the hands of the then Prime Minister Mr. P V Narsimha Rao. She also marched on the Rajpath on 26thJanuary 1993. Later, she was selected to represent the country to England under the Youth Exchange Programme conducted by the NCC.

After her graduation in commerce, she did her diploma in Public Relations and later on was selected to join both the Army and the Air Force. She was the first girl of the country to have commanded the Combined Passing Out Parade of the Indian Air Force. After her Short Service Commission in the Air Force, she worked with Maruti and Tata Motors as HR Manager and later on devoted herself fully to the cause of nation building along with her father in Prahar. She is an eloquent speaker and inspires the youth. At present, she takes care of all the activities of the organization very effectively. She was awarded the ‘Outstanding Woman of the Year’ by the then Water Resource Minister of Maharashtra, Ms. Sulekhatai Kumbhare.  She was also felicitated at the hands of the Governor of Maharashtra, the Chief Minister of Maharashtra and the Vice- Chancellor of Nagpur University.

After 75 Golden and inspiring years, full of patriotism and social service, Col Sunil Deshpande VSM left for his final journey on 20th April, 2018